In 1942-3, American Car & Foundry built Emergency-design, designation USG-A tank cars for SHPX leasing services as well as for the US War Department, Office of the Chief of Transportation (US Quartermaster) under USQX reporting marks, series 11168-11178, 11200-11309, and 11311-11475 (four cars in 11168-11178 had two domes/two compartments). The cars used contemporary underframes with World War One era tank designs. The late Richard Hendrickson authored an article about the cars in the October, 1990, RailModel Journal, available online via this link.

Modelers are fortunate to have excellent HO scale versions of the tanks from Tichy (originally Gould.) Many (if not all) of the SHPX tanks were scrapped/recycled in the postwar era, with the underframes being re-used, but the USQX cars soldiered on under USAX reporting marks (there were also Canadian prototypes, profiled by Russ Pinchbeck, including modeling, in the July, 2002, Railroad Model Craftsman.) There was also an article about the USAX cars by Thornton Waite in the January, 2006, Mainline Modeler. That is the inspiration for this project.

I have a seemingly great number of freight car projects nearing completion, so in between those painting, decaling, and weathering duties, I have dabbled a little in this project. I started with a Tichy tank car kit with a 54-inch dome width. There are several modifications to arrive at a USAX prototype, including modification of: 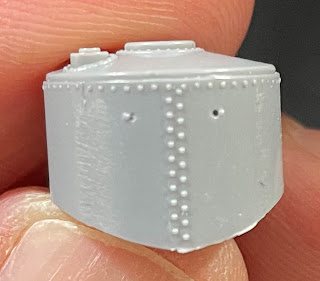 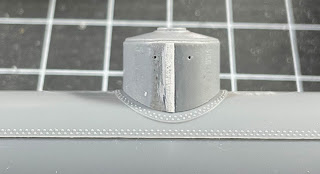 Thus far, I have made changes to the dome. The overlap of the tank shell on the dome is quite simple, to the point that it seems to be almost missing. I removed the rivets and added a strip of 0.005 thousand styrene, blending it into the face of the dome at left, and leaving a sharp edge at right, as shown in the photo directly above. I will (re)apply rivets to the dome in the appropriate locations. 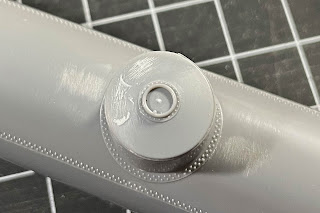 I also removed the safety valve locations, reserving the "center" of the valve locations. I puttied and sanded the old locations and then added discs to the top of the dome for the new locations, as shown. I then added the valve "centers" that had been salvaged, being careful to orient them so the top was "level" as these had gently sloped (actually curved) bottoms so that the top would be level. Somewhere in all of this, I added the dome to the tank and secured it with solvent cement. 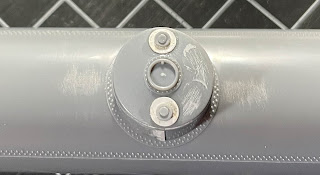 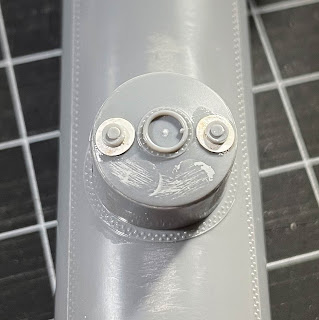 Next up in this series: the tank anchors and body bolsters. I have been working on artwork for USAX/US Army Transportation Corps lettering...
Posted by Ted Culotta at 8:38 AM