One of the interesting things about the Pennsy was its trucks. Like everything the Pennsy did, they were different. The trucks used on the X29 (and X28) illustrate this. The 2D-F8 (PRR designation) truck had a pronounced droop at the bottom of the sideframe, lending the trucks a distinct shape. This was similar to the ARA Type Y cast sideframe design. However, the Pennsy also employed several different types of bolsters, resulting in a dog's breakfast of combinations after cars were shopped. X29 572110 shown above is a fine example, with what I am calling an "ARA" bolster on the left truck and a "box" bolster on the right truck (click on images for larger views). Here are views of a few others, along with HO scale truck references

This is an early bolster with a notably sloped face in the bolster end. This is the truck included in the Red Caboose HO scale X29 model.

This and the following image illustrate the "box" bolster. This truck was offered by Sunshine Models as a set of white metal castings to be assembled by the modeler. 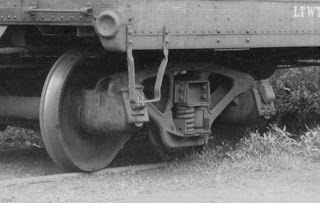 This bolster is what I have dubbed the "ARA" bolster. I am not aware of an HO scale offering for this. Should Kadee get around to offering an 'HGC' version of their 2D-F8 truck, I would lobby for this as it could be used as a Type Y stand-in, most notably for several PFE reefers. That beer can-like thing where the outer right hand spring is supposed to be located is a Miner snubber, which was supposed to reduce harmonic oscillation and improve ride qualities. There were other flavors. See the CP chapter in your 1932 ARA box car book.

This is the last and most "modern" of the bolsters with a vertical web cast in the center of the outer portion. This truck has been reproduced in HO scale by Bowser.

Note that while I have highlighted these as shown on X29s, they were used on many, many others classes of 50 and 55-ton PRR cars, so having representations of all of them in HO scale is a good thing, even for non SPFs*.

An additional silver lining in the Rapido X31 announcement 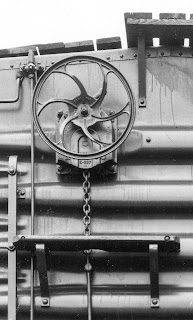 One of the additional benefits of Rapido's announcement of the PRR X31A box and auto cars is that we should have two additional finely detailed power hand brakes in HO scale. One is the Equipco 3160 model with E-312 hand wheel, as shown above on PRR X31A 69308. Because it was offered in the early 1930s, applications of this hand brake are few (at least I haven't come across many in my research). The three I have found are: 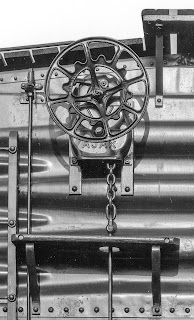 The other power hand brake that will be produced is an early Ajax power hand brake (there were many subtle changes to the housing over the years, so which version will be produced is not known by me) with no. 3059 hand wheel, which had only four "spokes" in the center - see above. The 3059 hand wheel has been offered for years by Intermountain, but is heavy in detail, so a finer version is most welcome, as its adoption was wide and deep.

Now, Rapido, why not do the Universal 5700XL with M1704 hand wheel that was used on many members of the X31A family (please)

Note: I did provide reference materials to Rapido for this project, but have not been consulted about the models, including any test shots of pre-production models.

Yes, it had been a long while since my last post. More on that in a post in the near future...
Posted by Ted Culotta at 5:07 AM No comments: