A little work straightening a casting

I have been slightly grounded of late after two surgeries to repair a torn retina, plus a mild heart attack this week for my ex-mother-in-law (who’s doing very well) and lengthy dental and orthodontic appointments for my son. Some of these things have just consumed time, but the retina “thing” has affected my ability to do some of my work and my ex’s mother does a lot of the heavy lifting of getting the kids where they need to be during the week. The eye situation is kind of tough when most of what you do centers around discerning details and either writing about them or recreating them in scale!

One thing I did was to pull out a Sunshine Models PRR F30A kit to scan the side to use as part of the process of creating decal artwork. I had to clean up the main car casting (literally a casting as the prototype used a cast steel underframe with integral stake pockets and other details!) In doing so, I noticed that the portions of the car between the ends and bolsters had a noticeable droop. I did what I usually do and put the casting on a piece of glass and put it into an oven that had been preheated to 250 degrees and turned off prior to putting the glass and casting into the oven. The casting softened, as they usually do. I put the “weights” shown in the photo on the casting until it cooled* (the graphic at the bottom of the page illustrates the relative structural strength of shapes and displays while deep side sills and center sills are great at provide support to the car body or loads.) All great!

Well, when the casting cooled, I noticed that the opposite of my goal had occurred. While the ends were now flat, the center of the casting had developed a noticeable droop, making the car look sway-backed. Normally, a flat car model would have solid center sills to straighten things or I could insert a piece of square steel or brass to get things straight. However, this car is an unusual prototype and the center sills are segmented, as opposed to being two single longitudinal pieces between the bolsters, and not as solid as the side sills, meaning that depending upon them to aid in straightening the car body was an uncertain proposition.

I reheated the casting and while it was still “soft” I used my drill bit box and one of my “weights” to try to remove the sway-back curve. I tried this several times to no avail. The casting seemed to have memory of the swayback shape.

I resorted to something that engendered greater risk, but given that the heating and flattening method was not working, was a risk worth taking and if it failed, I could always perform the heat and flatten method to return to the previous shape. I held the center of the casting under extremely hot tap water and after I knew that the casting had become slightly pliable, I applied force with both hands to bend the casting to straighten the center portion. I then changed the water to simple cold tap water and held the casting under until it hardened. The method finally yielded the results I was seeking…. or mostly. There is still a trace of a bow on one side, but it is hardly noticeable and I am hopeful that when the deck is glued in place it will provide enough stability to pull things even more into shape.

As always, your mileage may vary.

I will be doing a full writeup on this car, although where I will post it and how is TBD.

*no, the weights do not deform the casting. If you put weight on to a relatively structurally solid piece of a casting, it shouldn’t sink or deform from the weight. Now I’m sure if you heat the casting excessively and use a lot of weight, I would be proven wrong, but I try to get things soft enough and only use enough weight to apply the proper pressure. Also, see the graphic to understand a simple property of structural integrity.

Posted by Ted Culotta at 3:30 PM No comments:


I have received several inquiries regarding Branchline postwar AAR box cars kits from Atlas to be used as fodder for Speedwitch conversions. Here are some links, in no particular order or level of importance:


I believe that Steve can help with any questions about obtaining the kits.

The Speedwitch subjects that use these cars are as follows:

Posted by Ted Culotta at 5:59 PM No comments:

A long time ago, I posted about some tips to build the Speedwitch Southern gondola kit. I have done some additional work on the brake gear and want to show how I tackled things. I tend to deviate from the instructions, even on my own kits, and this car is no exception. The details follow. First, I do not have a brake arrangement for this car. I do for a similar series of Southern low-side gons built at about the same time. I used that along with prototype photos to arrive at what you see here. I cannot declare that it is 100% accurate, but it works for me.

I added the main three components: cylinder, reservoirs, and AB valve (pre-drill these first if you will be adding wire to simulate the piping). The cylinder uses a resin bracket and was attached to the face of the center sill. The AB valve was attached to a "platform" that spans the two cross members. The reservoirs were secured with brackets created from 1x4 and 1x12 strips that simulate the steel parts to which the reservoir lugs were bolted. I added nut-bolt-washer (NBW) and rivets (from an Athearn snow plow, although Archer rivets would do, as well.)

With the main components in place, I used 0.010" wire to represent the piping between the AB valve and the cylinder and reservoirs. This required some bending, fitting, and cutting to get things right, followed by securing the wire in place with ACC. I use fine, round-nose beading pliers to make these bends. With the main piping in place, I added the dirt collector to the AB valve, after first drilling it to accept the pipe from it to the train pipe. This pipe is larger, simulated with 0.015" wire, meaning the corresponding hole in the dirt collector needed to be larger. My technique is to first drill a hole with a no. 79 bit and then "open" the hole with a no. 77 bit. As I did not model the actual train pipe, the 0.015" wire runs from the dirt collector to the floor of the car, as shown.

With the piping in place, I added the brake levers and rods. The levers were created from 1x8 strip styrene, trimmed to shape using a single edge razor blade. The main lever rests in the clevis (part no. 29 on the Tichy AB brake set) extending from the cylinder. The clevis opening is actually about 0.020" wide so I always add a little .010x.030 shim at the end of the lever so that it nestles snugly into the clevis. For the bracket for the dead lever, I used a piece of leftover flat brass from an etched metal parts set. I created a u-shaped end to accept the brake lever and added two bends to allow the lever to be offset from the center sills once the bracket was glued to the face of the center sill. 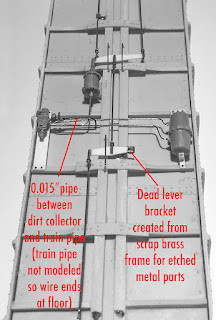 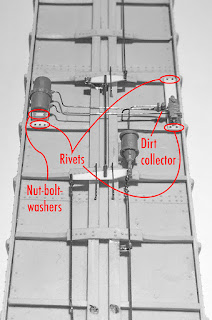 With the levers in place, I added the brake rods. My technique is to add a Tichy turnbuckle to the end of a piece of 0.012" wire. One end of the turnbuckle is removed so that the resulting piece looks like a clevis. I slide these clevises over the 1x8 styrene levers and mark the wire to create bends and measure distances for cuts as I go. The turnbuckles "hold" the wire in place over the levers, allowing me to make my measurements for bends and cuts. I use a black Sharpie to mark where to bend or cut the wire. Once all the bends are made, the rods and turnbuckles are secured with ACC. Note that my brake rods are secured into the bolsters. Also, for these bends, I use a pair of beading pliers with "flat" jaws that result in sharp bends. More round, "radiused" bends look right for piping, but for the brake rod wire, a sharp bend works much better.

That's it. The next post about this car will show the finished model. The photo included here is of a finished model I built years ago, although it is the same car from the same kit. Also, a shameless plug: there are six of these kits left and once they're gone, this one will be closed out for good. So if you'd like one, navigate to the Speedwitch site and get one before they're gone.