When I built my PRR FM class flat car (Part One and Part Two,) I alluded that I would follow up with a build of a B&O P-11 class flat car, a virtual clone of the Pennsy FM. That effort is presented here. While I used an F&C kit for the PRR FM, I modeled the B&O P-11 using a Sunshine kit I had on hand. The Sunshine kit is easier due to the stake pockets being integral to the "side" castings. However, the sides, ends, and underframe are separate parts, meaning the basic car body must be assembled. I did not find that difficult and given the choice, I preferred assembling the Sunshine car body over the one-piece F&C car body, since the F&C kit required the fiddly step of adding the individual stake pockets.

The Sunshine kit is older and suffers from a few inaccuracies that I corrected. They included converting the end sills to channel sections with the flanges facing outwards and replacing the bottom crossbearer cover plates. I added lead weights to this model and opted to forgo brake equipment. I also built a deck from scratch using strip styrene, which looks great, but led to a noticeable curving of the car body from end-to-end, that required a maddeningly difficult resolution.

I removed all detail from the ends and then created new details from scratch. This involved adding 0.005" styrene at the corners and around the draft gear (coupler) opening. I punched styrene discs that were added to the corners and then "dished" using a drill bit. The grey color is Mr. Surfacer 1200 added to create a softer, rounder look to the depressions. I added strip in several places to simulate the triangular webs around the push pole circles and the draft gear. These were trimmed to a triangular profile, as shown in the photo of the completed end.
Detailing followed my typical process. Grabs were bent from 0.010" wire while the uncoupling rods are 0.012" wire with Yarmouth etched eye bolts. The grab attachments are tiny discs punched from 0.005: styrene with rivets added. Those rivets, as well as the ones at the corners, were harvested from an Athearn snowplow shell. Angle cock/air hose parts are by Hi-Tech. The sill steps are etched parts from Yarmouth.

The deck was fashioned from individual styrene 0.030" x 0.080" styrene strips. The individual boards were sanded a bit, to create a bit of texture. They were notched in appropriate locations to fit around the stake pockets.

The story has a bit of a muddled finish. I painted, lettered and weathered the model, only to see the curve in the top of the deck become more pronounced over time, resulting in an unrealistic dip in the center of the car. I used almost boiling water to straighten things out to an acceptable degree, but the ancillary result was that the finish of the model was ruined. I have to remove the lettering and repaint the sides and re-decal and then weather the car again. To be continued... sigh
Posted by Ted Culotta at 8:50 AM 3 comments: 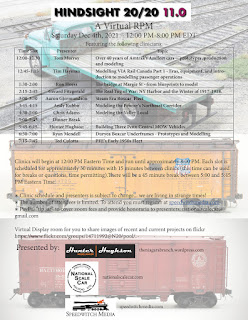 I took a "break" from the demands of the day job to venture down to Florida where, with the help of Jon Cagle of Southern Car & Foundry, we began the process of disposing of some of Bill Welch's estate items. The first task was to bring his considerable stash of plastic models, including what was surely at least one of every 1/35 scale Sherman tank kit and/or accessory that has ever been produced. We set up a couple of tables at Modelpalooza and managed to move the goods, so to speak. The event was an IPMS meet, similar to RPM meets, with vendors, models on display, and clinics. I have always espoused following the efforts and tools of our cousins in the military/plastic modeling communities as they often have tools, techniques, and skills that are equally applicable to our efforts, but often don't cross over to our community. I have included some photos of the fine efforts I saw, with a bias towards my own interest in WWII aircraft. There was even a model railroad themed display (scroll down.) Enjoy!
note that captions do not include names of the modelers as the models are to be judged and are anonymous to remove any bias
P.S. I will be getting back to a more regular blogging cycle, both because I miss it and I also have several projects to update. 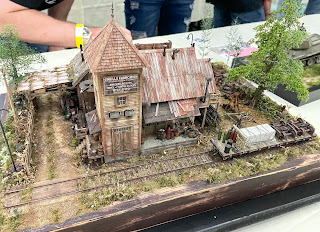 Posted by Ted Culotta at 4:27 AM No comments: