Yesterday, I posted a question to the Steam Era Freight Cars list (STMFC) on Yahoo! Groups in the hopes that someone could identify a detail on the CNW/CMO AAR Recommended Practice Gondolas built between 1945 and 1956. Here is the query:

If one looks at photos of the CNW/CMO AAR recommended practice and related "11-panel" gondolas of 1945-1956, there is a distinctive detail at the lower right corner of the far left panel (adjacent to the left end). It appears to be a casting of some sort. In looking at my photos, I cannot identify it or its purpose. Since it is on both sides of the car, it is unlikely a defect card holder, as these were usually only on one side of the car. Does anyone know what this detail is?

It can be seen in the articles on these cars by Jeff Koeller in Mainline Modeler, May and June, 2005.

The Sunshine kits do not duplicate this feature.

I received a few requests for photos or at least to be pointed to photos. To that end, I have created this blog post. Click on any of these images to view a larger version. The two-part article by Jeff Koeller is excellent and I recommend adding it to your library if you do not already have it.
CMO 88173 has its defect card holder (a different type of defect card holder) mounted in the same location as CNW 70351 shown above.

Can anyone identify this detail? It almost looks like one of those beer bottle openers mounted to the face of a bar... just sayin'

What do you model?

Asked almost as frequently among model railroaders as, “Do you have a layout?” is “What do you model?”, meaning some combination of what railroad(s), location, and era do you model? Like many, I have progressed in my interests and thinking. I have yet to truly construct anything beyond a modest, partially completed, New Haven-themed layout with my dad, and that was almost 30 years ago. About a decade ago, I conducted a lot of research and put some effort into designing a few different New Haven layouts, all in the central portion of Connecticut.

A little less than ten years ago, I started to gravitate to the Great Northern, with its impressive steam power, first being attracted to the area between Litchfield and Benson, Minnesota (see the rough map I created). With my divorce and other life interruptions, I drifted away from things for several years. When I returned, I became smitten by the Inside Gateway from Bieber, California, with an interchange with the Western Pacific, north through Klamath Falls and over Southern Pacific trackage in places, up to Bend, Oregon (I was smitten with Bend literally, as well, looking to it as a place to move when I become an empty nester).

At some point, I decided to look at things through a different lens. I asked myself what interests me most? It’s little surprise that my first love is freight equipment. Specifically, I like refrigerator cars, flat cars, and gondolas. There are many places in the Pacific Northwest where these car types were plentiful. I also know that I am not interested in modeling a hotshot mainline. My preference is for something more modest. That narrowed things further. Somehow I stumbled on to the SP in the area around Ashland and Medford, Oregon. The clincher: my favorite wheel arrangement is the 2-10-2, a locomotive used in great quantities by the SP to conquer the Siskiyous over one of the most daunting grades in the U.S.*, to meet the line to Dunsmuir, California (the 2-10-2s were known as “decks” by the SP crews). This line also continued to operate steam well into the 1950s, meaning I could move my chosen date to October, 1951, to accommodate some additional “modern“ freight equipment and October to coincide with the harvest season in the Rogue River Valley.

It will still be another several years before I can entertain actually building any of this, except for the rolling stock and perhaps a structure or two. However, I have settled on a place and time that answers the question, “What do you (aspire to) model?”

*the grades over the Siskiyous were severe enough that when the American Railway Association put the AB schedule brake equipment through its operational testing paces, that’s where the tests were conducted.
Posted by Ted Culotta at 4:02 AM 1 comment:

Over the past few weeks I have been working on several sets of Bangor and Aroostook decal artwork. I came across something in this photo* that I had not noticed previously and I found it to be interesting enough to share. The placard on the door not only cautioned that the car contained newsprint, but the placard was actually shaped like a roll of newsprint. I plan to create this placard in HO scale and it will add a nice, prototypical touch to a BAR or Maine Central box car model in future. 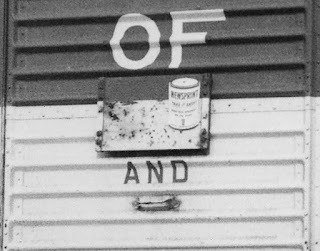 The lettering on the placard read, "NEWSPRINT" and the next line cautioned, "TAKE IT EASY". I can not discern the smaller writing below that. A mystery to be solved... 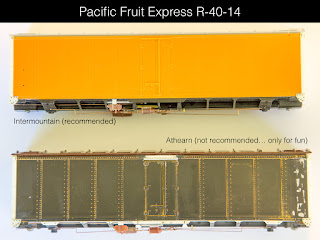 The file for my presentation at the St. Louis RPM can be accessed via this LINK (it's not wildly different from what I presented at the NERPM... however, I have made much progress on models since St. Louis so the next time I present this topic, it will be quite different!)

Any questions can be posted in the comments section below. Enjoy!
Posted by Ted Culotta at 2:20 PM No comments: