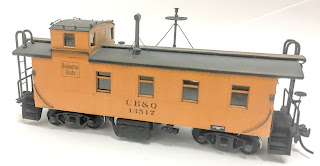 Longer ago than I'd care to admit, friend Al Hoffman asked if I would paint, decal, and lightly weather a model of a Burlington waycar that he had built. The model is a Q Connection resin modernized NE-10 Waycar. 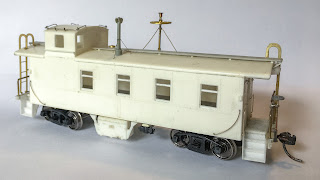 Al is a talented builder. I agreed, hopeful that I wouldn't diminish his finely detailed model. The model as turned over to me is as seen in the "in-progress" photos shown herein. 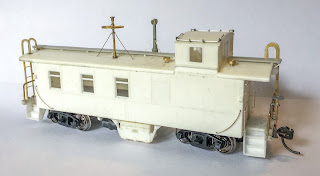 I blasted all of the metal, wire, and engineering plastic surfaces with 220 grit aluminum oxide in preparation for painting. I followed by cleaning all surfaces using dishwashing liquid and a soft toothbrush. I thoroughly rinsed the model and allowed everything to air dry. 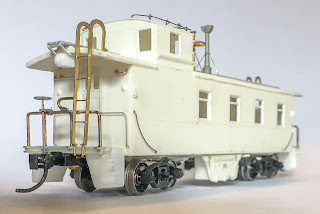 For painting, I began with a coat of TruColor primer on both the interior and exterior surfaces. For the main body color, I used a mixture of TruColor Daylight Orange and MEC Harvest Yellow. I masked the areas that would remain orange and sprayed the remainder of the model, including underframe and trucks with Tamiya XF-1 flat black. Imagine my horror when I removed the masking tape and peeled up large strips of the orange. A closer examination revealed that there were many areas of the car body that had a decidedly glossy sheen. 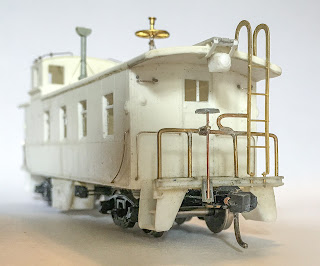 After an outburst accentuated with many colorful bits of verbiage, I put the model aside. After several months, I came back to it. I took it to the blasting booth and hit every area that I could see that might pose problems with 220 grit aluminum oxide. I repeated the washing procedure. I sprayed the orange areas using a mix of Tamiya paints, about 80% X-6 orange, 10% XF-59 Desert Yellow, and 10% XF-19 Sky Grey. I again masked the areas to remain orange and sprayed the rest with XF-1 flat black. With great trepidation, I removed the masking tape. Success! 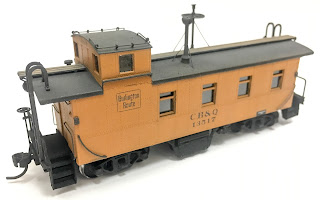 The orange areas were glossy already so I applied the decals without any extra gloss coat. The model was lettered with Microscale 87-1197 for CB&Q Way Cars in the orange scheme (1954-1970). At this time, I also drybrushed orange on to the top surfaces of the running boards. I sealed everything with Tamiya XF-86 flat clear.

I lightly weathered all surfaces with Bragdon's weathering powders. Soot gray powder was applied to everything including the trucks and wheelsets. Grimy black was applied to the roof and truck sideframes. The powders were sealed with the same Tamiya flat clear. Small black rectangles were added to the car along with white repack stencils. These were also sealed with flat clear.

The final detail was to add window glazing. The glazing is 0.010" clear styrene cut to shape. To affix these pieces, I dipped them in Future (now Pledge) floor polish and nested them into the back of the window frames. I added a little more Future from the back, which served to "glue" the glazing in place.

I assembled the car body to the frame and screwed the Tahoe Model Works trucks in place. I then met Al at Pepe's Pizzeria in New Haven to receive my reward - a pepperoni pie.
Posted by Ted Culotta at 4:57 PM 1 comment:

The state of the art 30 years ago 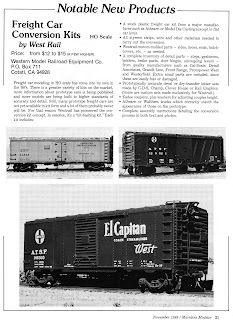 As many of you are aware, over the past few years I have been digitizing my photo collection*. With that mostly done except for maintenance as I acquire new images, I have continued the process by doing the same with drawings and magazine articles. It has made finding articles a simple process.

As I have been scanning, I have found some long forgotten articles and also some other treasures. This product notification from Mainline Modeler, November 1988 struck many chords. The most visceral was that it reminded me of the late Richard Hendrickson, the founder (along with his wife Sandra) of WestRail. Richard was a mentor and source of inspiration to me, as well as countless others. I thought that this post would be a fitting tip of the cap to that legacy.

However, it also serves as a marker or yardstick of where we were 30 years ago. Westerfield, Storzek/Des Plaines, and Funaro & Camerlengo were just beginning to sprout, Sunshine was several years in the future, and plastic models were Athearn, MDC/Roundhouse, and the mix of nicer offerings from Front Range, Ramax, E & B Valley (predecessor of Eastern Car Works), et al. Like his modeling, Richard's WestRail venture took the available tools of the day to make something out of nothing. Interestingly, I built one of his WestRail flat car kits last year** (pictured above). It was as enjoyable as anything else I have built recently and it fits in with my love of kit and resin bashing projects. Thanks for the memories and inspiration, Richard (and Sandra)! We are where we are today because of the efforts of you and others back then... we were able to climb on the shoulders of giants.

*I have presented a clinic about the software that I use to manage all of these digital files. It has proven to be nothing short of a miracle for me. The clinic presentation may be accessed via this link. While there is certainly a lot lacking by not seeing it live, there is enough in the file to give an idea of the software, Adobe Lightroom. To facilitate the quick scanning of magazine articles, I am using a Canon imageFORMULA P-215II document scanner. It scans both sides of the pages at the same time.

**that model and others of the AAR 50-ton design flat car were profiled in Prototype Railroad Modeling, Volume Four.
Posted by Ted Culotta at 7:29 PM No comments: