The lighting and angle at which this photo was taken resulted in a perfect shot of the trademark feature of the Type 30 underframe - the round push pole depressions nested in the diagonally-oriented faces of the body bolsters. See this feature beautifully captured on the body bolster above the left truck in this photo. As this car was 6,579 gallons capacity, it had only a single safety valve on the dome. 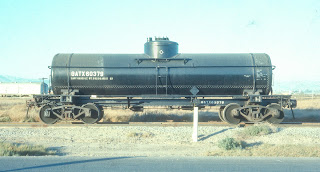 By the time of the Type 30 design (1928 through World War Two), GATC had settled on a single, center tank anchor, visible below the ladder and behind the running board, securing the tank to the underframe. This car was built in March, 1930. Note that it used only two tank bands, one located at each bolster. Also, note the fairly long dome step. 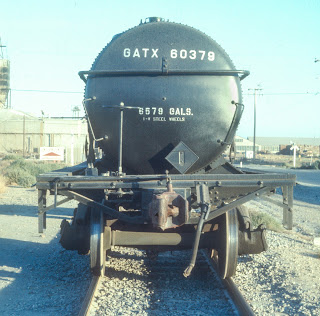 Contrast the GATC style end arrangement to the AC&F design shown here on a Type 27 tank car, with channel section end sills and side sill sections between the bolsters and the end sills. 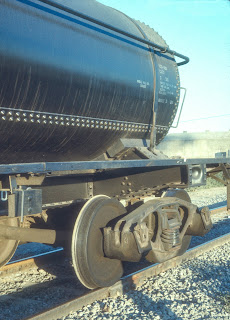 This photo provides a great view of the trademark bolster with circular push pole depression on the angled face, as well as the route card board and air release rod, both at extreme left below the running board. 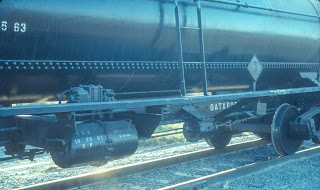 This photo by Jack affords an excellent view of the main brake components, including reservoirs, AB valve mounted directly above the reservoirs, and cylinder with its mounting arrangement clearly visible, as well as the ladder, a portion of the tank anchor, and the placard holder. 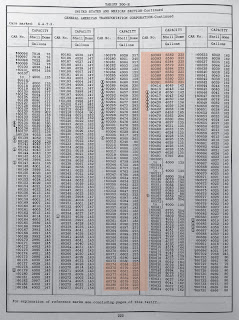 I consulted the reprint of Freight Tariff 300-H offered by Ian Cranstone, originally issued September 13, 1955, for tank car capacities. I found a group of 17 cars in the series GATX 60374-60391, with capacity of ~6,580 gallons and dome capacity of 225 gallons. Those cars are highlighted in the relevant page, copied herein. I highly recommend this resource, as well as the earlier 1936 edition, also offered by Ian Cranstone.
Posted by Ted Culotta at 5:08 PM No comments: 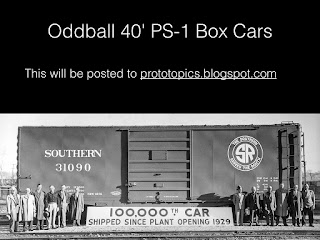 I presented a clinic this past weekend at the New England/Northeast RPM titled "Oddball 40' PS-1 Box Cars." A .pdf version of the presentation file may be accessed via the linked clinic title above. Feedback is welcome! Thank you to Tim O'Connor for furnishing some valuable additional information.
Posted by Ted Culotta at 8:16 PM No comments:

I had the pleasure of attending the New England/Northeast RPM this past weekend in Enfield, Connecticut. This is the third year at the current location and the meet has become more of a "super-regional" event as opposed to the local flavor it had at the old venue in Collinsville, Connecticut. I suspect that it will continue to grow. That should be in no small part to the quality of the clinicians as well as the large display room full of excellent models covering the gamut of eras, excellent facilities, and a variety of vendors offering items to scratch the prototype itch. Lastly, the hotel has an area to socialize after the conclusion of events each day (including adult beverages), which I believe is an extremely important component for an RPM site. It's the people that make the event. What follows are a few images of the models that were on display...