General American 6719 is an interesting study. It was a General American 1917-design tank car built in January, 1921. It features many of the traits typical of the design, most notable the five “radial” courses to the tank. However, this car is different since it was modified to incorporate several changes. As expected, it was equipped with AB-schedule air brakes, replacing the KC-schedule brakes. Additionally, the expansion dome was fitted with a replacement safety manway and frangible disc vent. There is what may be a fitting or plug on the side of the dome. There are also what appear to be two patches, either as repairs or to strengthen parts of the bottom sheet of the tank. Finally, there was a chalkmark on the side of the tank noting, “syrup” which was undoubtedly a common load given that the car was leased by Union Starch & Refining, a producer of corn products, including corn syrup. 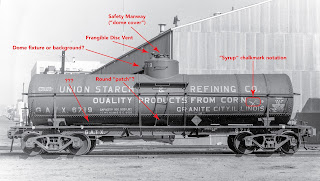 This car could be converted from a Tangent model using a safety manway from another manufacturer (Tangent, Tichy, Intermountain or others) and a frangible disc vent from Owl Mountain.
Happy Thanksgiving!
Posted by Ted Culotta at 12:02 PM