The first installment on the Kadee Santa Fe Bx-57 illustrated some of the changes effected to replicate the differences on the prototype. It is worth reiterating these major details. Of note, the Bx-57 class employed US Gypsum expanded metal brake steps and running boards, while the model was equipped with Apex Tri-Lok running boards and steps (Kadee has since produced the correct US Gypsum parts, resulting in a “drop-fit” replacement for the running boards; the brake step is a Plano etched metal part using the Kadee supports after carefully removing the Apex Tri-Lok step.) The Bx-57 also used the “upside-down” version of the Improved Youngstown door, while the model uses the more common version; a Southwest Scale door was substituted, along with scratchbuilt placard and route card boards. 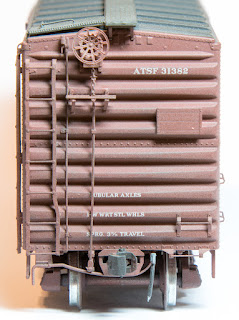 Kadee did replicate a few quirks of this class. Counter to usual Santa Fe practice, the Bx-57s did not have transverse-mounted brake reservoirs. Also, this class had the “SHIP AND TRAVEL Santa Fe all the way” slogan on the left side and the name train slogan on the right (Super Chief on this car) which was counter to Santa Fe painting and lettering practice. Kadee replicated these details faithfully, as well as the Royal Type F brake regulator, Ajax power hand brake, and ASF A-3 Ride Control trucks.

A note about the body color and paint matching is in order. As I replaced the door, I had to closely match the Kadee body color. I used three Tamiya colors to arrive at a satisfactory match. The mix is 50% Red, 25% Hull Red, and 25% Red Brown from the Tamiya acrylic line. As an aside, I love the ease with which Tamiya paints airbrush so this mixture will be my go-to Santa Fe Mineral Red-Brown for all future projects.
I replaced with wheelsets on the trucks with Kadee 0.088” tread width replacements. As I was modeling a car approximately 16 months old, I lightly weathered the car with a single application of Bragdon’s light gray powder, which mostly disappears under a clear flat coat (Tamiya). I added chalkmarks (a combination of pen and ink [a forthcoming post will cover this technique] as well as Speedwitch decal set D135) both before and after the weathering. I also applied a fresh paint patch over the repack stencil and added a late 1951 repack stencil. The door latch hardware (to the left of the doors) was salvaged from the original doors. I had to scrape off the ‘L’ and ‘R’ stencils to accommodate the door hardware so I added new ones from a Santa Fe box car decal set prior to weathering. I added a brake test stencil to the reservoir (even though I replaced the brake equipment, the original reservoir lacked this detail, too.)

After all of these subtle enhancements, I painted the angle cock/air hose parts black and gray. I added a final flat coat over everything. I polished the treads on the wheelsets, replaced them in the truck sideframes, and attached the trucks. Lastly, I added bits of paper for route cards. With that ATSF 31382 was ready for service. The PS-1 from Kadee remains one of the finest models ever produced in any scale. I look forward to adding a couple more from other roads to the fleet.
Posted by Ted Culotta at 7:11 PM