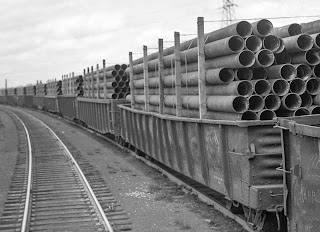 A little while back, I started work on a Funaro & Camerlengo McKeesport Connecting HO scale gondola. I have done a fair amount of work on the model since that post and will update on that in the near future. At the same time, I have been working on a pipe load for the model. The inspiration for the load is the photo shown above of a pipe load in a Mckeesport Connecting gon. 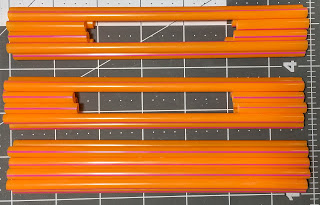 "Top" view of the load layers with four pipes over five. The top layer is at bottom

To create the load, I pulled out some straws that I "liberated" from Dunkin' Donuts years ago. I used them because they are quite rigid compared to other straws (McDonald's also has good, sturdy straws that can be used for loads.) I cut the full pieces to roughly 48 feet in length using a good paper cutter. The filler pieces are obviously shorter! If you click on the photo above of the prototype to enlarge it, you will see that the wood side pieces that help to contain the load have wire tying them together between every two layers of pipe, as well as on top. There is also banding around the entire load. 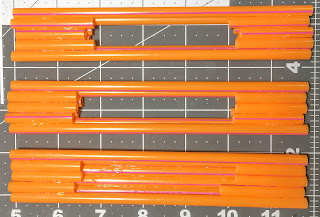 "Bottom" view of the load with five pipes visible

I built the load in three sets of two layers. The two lower layers are hollow to conserve straws as well as to provide a cavity for a weight. The bottom layer will be affixed to a sheet of 0.010" styrene. The wire between each layer will be created with black thread. The banding will be replicated with Chartpak drafting tape, 1/32" in width. The wood to contain the load will be 4x4 hardwood represented by 4x4 styrene strip. I created the load this way so that everything can be prepainted and "assembled" to simulate what is seen in the photo. The straw "pipes" were glued together with Gorilla Clear Grip adhesive. More as the model progresses...

The load loosely placed in the carbody (note that I have removed the rivets from the side of the car where the collapsible stake pockets were located, as these cars did not have the stake pockets even though the model does!)
Posted by Ted Culotta at 2:44 PM