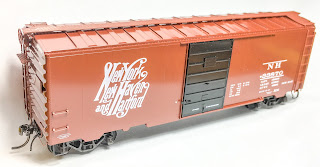 Earlier this year, Kadee released an early version of the Pullman-Standard PS-1 40' box car. As seen in the photos, they tooled an entirely new car body with details to match the early versions. The basic model is shown here in New Haven livery (Kadee did an excellent job capturing the NH's freight car red color, as well as the black doors.) 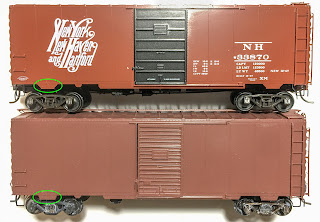 The most notable differences are on the sides with the tabs and sill sections below the actual side sills. Notice not only the bolster sections within the green-rimmed rectangles, but also the sections that span the area below the doors. The early version is shown at top above (the NH car), while the undecorated car is one of the previously released models that replicates the cars circa 1949 and later. There were many subtle variations in these details prior to 1949. Kadee's model is tooled to represent one flavor, with 6" ship channel tabs at the bolsters, 6" x 3-1/2" bulb angle reinforcements under the doors, and 4" x 3-1/2" rolled angles at the crossties. 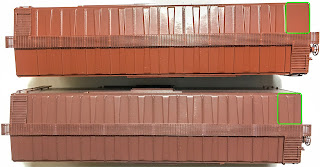 The early version of the roof on the newest Kadee car is shown at top, while the later 1949 roof is shown on the model at bottom. The difference is the absence of the corrugation in the end panels on early (roughly pre-1949 built) cars. Both iterations have riveted seam caps (there were prototypes with welded seam caps). 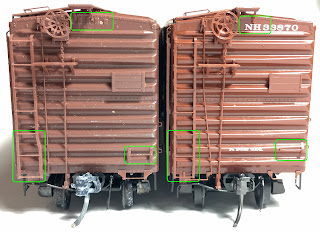 The early PS-1 end is shown at right. Note the absence of trapezoidal stiffeners at the top, the three-point bracket grab at right, and straight stiles on the ladders, as well as the grab below the ladder on the early New Haven car. Also, of interest is the Universal power hand brake, particularly the wheel, which is stunning and has never been offered in HO. Unfortunately, it is not correct for the New Haven's Universal hand wheel as shown on the prototype below. 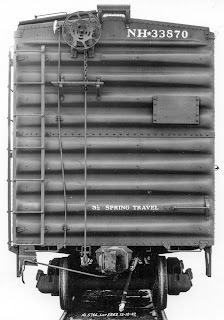 The underframe shown above is from the New Haven model. Unfortunately, it is not correct for early cars, as Kadee did not tool a new underframe. Early cars used what were essentially welded AAR underframes. The PS-1 welded underframe, similar to that shown on the model above, was introduced in 1949. The main difference was that in 1949 there were only four stringers total, as opposed to the six on the Kadee model, a 1951 introduction.
Posted by Ted Culotta at 7:13 PM