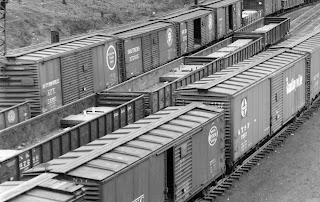 I chose this photo for today’s Wordy Wednesday post because I feel it illustrates something worth replicating in model form. Note the small steels plates in the two gondolas closest to the left edge of the photo. The plates are stacked at both ends of the cars. They are also laid on top of boards and separated by boards, as well. The center portion of the gons are “empty”. This is highly realistic and would be easy to replicate using sheet styrene cut into appropriate sizes and stacked and bundled, as shown. I will do a follow-up post in the near future illustrating how I replicate this.

The near gon is a Nickel Plate Greenville-design 52’6” car offered in HO in styrene by Life-Like Proto 2000 and previously in resin by Sunshine. The next car is a P&LE 70-ton USRA-design car. These are available in resin from Westerfield and in styrene from Walthers in a far simpler (less detailed) form. Protocraft has imported O scale brass models of Greenville-design 52’6” gondolas.

The image was recorded looking east at the Nickel Plate’s E 75th Street Yard in Cleveland, Ohio, circa 1949. The photographer is noted as “Burger” and the photo is from the Jay Williams/Big Four Graphics collection