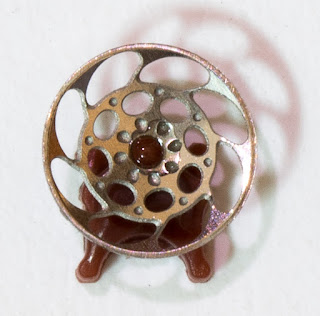 For me, the absolute, unequivocal highlight of the weekend was one of the smallest items (HO scale) at the venue. However, it created reverberations in the prototype modeling community. Yes, Virginia, we have a Klasing power hand brake! As Teri Hatcher said on Seinfeld, “They’re real… and they’re spectacular!” They are being produced by True Line Trains. The housing and bell crank are styrene while the hand wheel is finely etched metal.

A few notes about the parts and their application are in order. They represent the Klasing Type 650-D power hand brake with a no. 646 hand wheel. There were changes over the years, particularly to the hand wheels; the version presented here is from a late 1942 drawing. Regardless, the wheels are still similar enough that the TLT wheel can simulate the earlier (or later) hand wheels - something is a lot better than nothing! The link to True Line Trains is here. For additional reading, see Railway Prototype Cyclopedia 10.

What follows is a rough listing of cars compiled by me that used the Klasing hand brake. Where I state exact numbers not known, that means not known by me, at present, not that it can’t be uncovered (I meant to write a blog post, not the definitive work on the Klasing power hand brake!) I will try to update this as information solidifies and incorporate it into a spreadsheet for easy reference. Enjoy! A big thank you to Darren and Randy from True Line Trains for pursuing these and to Gene Green for his encyclopedic knowledge of these parts, as well as to the Klasing family for sharing the information and their passion with Gene.