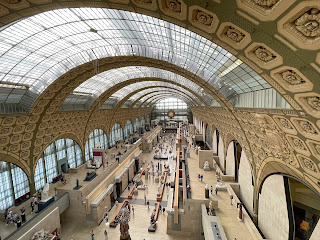 At the beginning of the year, I began a new job with a French company (Back Market) and have had the good fortune to travel to France on a couple of occasions. I recently visited the Musée d'Orsay (wikipedia entry). You might ask why I would share that fact here. Well, the museum is a glorious old train station that was saved from demolition and converted to a museum housing a magnificat collection of works by some of the great masters of the Impressionist and post-Impressionist genres, including many well-known and a large number of lesser-known artists, including Monet, Manet, Toulouse-Lautrec, Pissarro, Renoir, Cézanne, Degas, Seurat, van Gogh, Gauguin, Rodin, and many others. 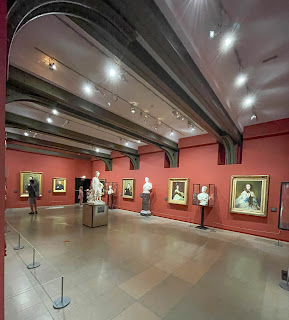 While I highly recommend visiting for no other reason than that the works are magnificent, seeing a beautiful and significant railroad structure preserved is another impetus. Below, I have also included snapshots of a couple railroad-themed works that caught my eye (FYI- "pont de chemin de fer" translates as "railroad bridge". I was particularly impressed with the work of Pissaro that was on display. If in Paris, I highly urge a visit. The museum is in the same part of the city as many of the other notable attractions.