In 1927, the Illinois Central received 500 cars each from Pullman Car & Manufacturing (predecessor to Pullman-Standard which was the result of the merger of Pullman with Standard Steel Car) and Mt. Vernon Car Manufacturing Co. The cars were of single sheathed construction with zee-bar structural members arranged in a Howe truss configuration. They had fewer ‘panels’ per side, with only four diagonals total. Other specialties included Hutchins Dry Lading roofs, Youngstown steel doors with Camel no. 50 fixtures, Dreadnaught steel ends (three main corrugations in the top panel over five in the bottom), and cast steel sideframe trucks (the prototype's trucks are most, but not exactly like, the 40-ton ARA trucks with Barber Lateral Motion detail from Tahoe - TMW-114 and TMW-214). One other notable feature was that the side sills were angles, rather than the more common channel sections. The cars were initially assigned to the 176000 series, but after the war were renumbered into the 16000 series.


HO scale models were offered by Sunshine approximately 20 years ago. They were quite good, featuring ‘board-by-board’ patterns. At this year’s Chicagoland RPM, the gift to early registrants was a set of parts to replicate these cars using an Accurail 7100 undecorated box car kit as the foundation. The parts include ends, door rollers, underframe parts, AB brake components, and other details. One note is that the crossbearer bottom cover plates have a single row of rivets in the parts set while the prototype had a double row. Although I do not have drawings, this is perhaps due to the use of pressed steel crossbearer shapes that were arranged flat back to back (again, this is purely my supposition).

These cars were included in Focus on Freight Cars, Volume One, pages 26-27.

It is my goal to complete all four of the recent gift kitbashes from the 2016-2019 meets to display at next year’s event. The cars are the B&O M-15K rebuilt Wagontop box car, Chicago Great Western 1937 AAR box car with Carbuilder’s ends, Fruit Growers truss rod reefer, and the IC single sheathed box car. Let’s see if I can keep to that timetable. 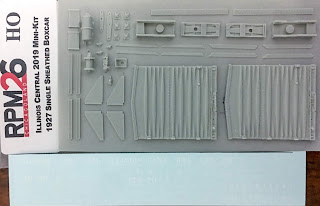