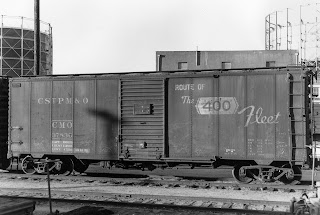 In 1945, Chicago and North Western subsidiary Chicago, St. Paul, Minneapolis & Omaha purchased 400 AAR-design box cars of the postwar iteration from American Car & Foundry. The cars were assigned to series 37500-38298, even numbers. At first blush, the cars hewed closely to the design, with 10-panel riveted sides, Murphy rectangular panel roofs, 4/4 Improved Dreadnaught ends, and Youngstown corrugated (first 200 cars, shown here) or Superior panel steel doors (last 200 cars) and riding on ASF A-3 Ride Control trucks. Their most distinguishing characteristic was the Duryea Cushion underframe, with deep crossbearers that are visible in this photo, and Universal brake adjuster, a portion of which is also visible just to the right of the AB valve. However, the most interesting detail to me is the extreme compression of the truck springs (see below), no doubt due to a heavy load. It’s not something one sees often, let alone notices.

The photo is yet another low-angle, late-in-the-day flat light gem from Col. Chet McCoid that quite literally sheds light on so many details. Also note the gas storage tanks at both left and right. San Diego, California, November 19, 1954, Bob’s Photo 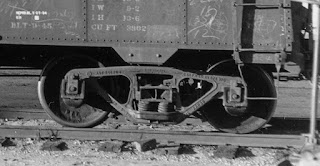