The Rapido Northern Pacific 10000-series double sheathed box cars have been eagerly anticipated by HO scale modelers since they were announced a couple years ago. Their arrival is yet another example of a signature car being produced in injection molded styrene, although this is the most esoteric, with previous cars such as the B&O Wagontop and Milwaukee Ribside box cars representing highly recognizable prototypes. The NP cars are no less significant, but are certainly more subtle. The fact that they even exist in a medium other than resin reminds of moments when my late friend Richard Hendrickson would say, “these are the good old days.” We are being confronted with riches we never imagined.

Certainly the most distinctive feature of these cars and for that matter, most NP house cars of the 1920s, was the trademark radial roof, with extremely narrow seam caps. Rapido has quite faithfully and delicately replicated this characteristic. Accentuating the roofs are finely rendered "wood" running boards (note: I prefer styrene over wood, particularly laser cut wood).

The car body is no less well-detailed. Rapido expended great effort to correctly simulate the grooves on the double sheathed wood siding. The result in convincing. The doors, including the top tracks for the hangers and the guides are nicely recreated in scale, as well. The Murphy ends with seven corrugations in the top panel over eight in the bottom are nicely detailed. The lumber door in the A end is faithfully replicated.

The difference-maker in a car at a $50 price point is the detailing. The cars feature wire grabs, with the lower ones on the side and end ladders incorporating the hybrid “straight-drop” configuration of the prototype. The two grabs at the left of the side and the hybrid grabs appear to be of a different material and are also about 0.002" thinner diameter wire, approximately 0.011"-0.012" vs. 0.013"-0.014".

The Miner ‘Ideal’ lever hand brake is a thing of beauty that I hope will be made available as a separate part. One area of criticism (and it is common with most manufacturers’ models) is the pipe for the pressure retaining (“retainer”) valve. It should be about 0.008". It is significantly more pronounced on the model, no doubt in the interest of durability and moldability. It is an area I will improve. The sill steps are exceptional, being fashioned from metal, and following the shape and contour of those on the prototype.

The trucks are the only other area where I can express reservations. While they include separate brake shoes and generally follow the prototype, the detail is a little soft in comparison to the offerings of Tahoe Model Works, Kato, Kadee or Tangent. I would like to see this area improved on future Rapido offerings. The truck mounting is also a little "wonky". Even with the screws fully tightened, the trucks had a loose quality. Perhaps the integral screw-washer arrangement as well as the mounting post mitigates this in operation. Nonetheless, it doesn't seem all that "tight". I hope that my concerns are overcome in practice and operation by clever engineering. One other nit: I would encourage manufacturers to lead the push to 0.088” tread wheelsets. They operate the same as code 110 sets. Make the change!

The AB brake system as added to these cars circa the 1940s is faithfully replicated. While the styrene piping and rodding are compromises, they are rendered as delicately as can be expected. A nice touch is the NP tensioning mechanism visible as a spring-like device in the detail photo included above. Rapido has done a good job at capturing the layout of the prototype. Kudos here! 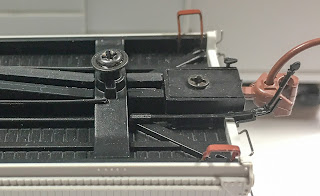 Rapido is to be commended for producing a fine model of a significant prototype. If online comments are any indication, they are already sold out. I hope it is an indication of success.

I purchased a pair of undecorated models and am waiting for decals (one model to have and a just-in-case extra). I will highlight the finished model in a subsequent post after I paint, letter, and weather it. I will also document the changes and enhancements I make. Yes, there are a few to be made...