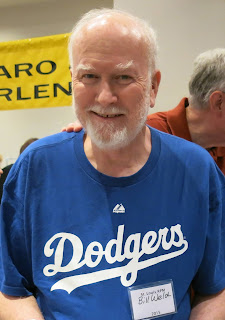 I lost one of my best friends on Sunday, November 15 when Bill Welch succumbed to cancer. He was a kind soul, a kindred spirit, and a companion of almost 25 years.

I met Bill in 1996 at the Friends of the Freight Car dinner in conjunction with the NMRA convention at Long Beach. He and I were both new to the freight car "mafia" modeling community so we shared a bond as the slightly awkward entrants to a party where others knew each other well. From that point on, we were roommates at just about every RPM event we attended together, including more Napervilles, Cocoa Beaches and St. Louises than I can count, as well as other meets from time to time. We would often muse about our "Christmas morning" when the Sunshine sales room would open at Naperville, with all the new releases for that year. Before turning off the lights at night we would peruse each other's stacks of photos that we had acquired that day, making notes about ones we, too, wanted and discussing the modeling possibilities.

Bill shared my love for World War Two era aircraft (and modeling). We were also "tool guys" seeking the latest gadget to aid our modeling efforts. Baseball was another deep love in common and we both shared many conversations over the winters, close to our "hot stoves" discussing trades and signings and the fates of his Dodgers and my Red Sox. We spent countless hours discussing politics and policy, as well, both being passionately interested in the subjects. He was a "breakfast person," too, and I will always remember his quest to find good places for early morning grub wherever we were.

I will miss him deeply. He approached every day with a positive spirit and attitude and couldn't wait to share that with others. As a minister, it is interesting to note that some of his greatest sermons were about detailing models, overcoming the paralysis one can face when tackling a project, and his love of airbrushes and painting and releasing that zeal in others. Of course, he also preached about the Fruit Growers consortium. I am humbled to carry that torch to bring his work to fruition as a book. I am deeply honored to be able to make his vision and passion a reality for others.

There is a virtual celebration of Bill's life and legacy planned for December 9th (details will be shared at all the various groups.io lists, Facebook, and the Speedwitch site.) He touched many lives as a photojournalist, minister, and modeler as well as a friend to many.

Rest in Peace, my friend. I can't imagine the RPMs without you. I hope wherever you are, the Sunshine tables are filled with lots of new releases!

One of Bill's last projects
Posted by Ted Culotta at 6:11 PM 1 comment: 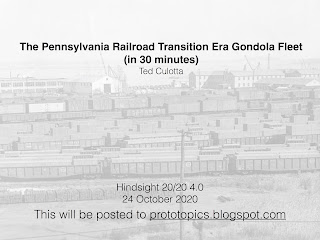 My presentation from Hindsight 20/20 4.0 this past weekend can be viewed as a youtube video or just the presentation file in .pdf format. Enjoy and all feedback is welcome

Registration is open for Hindsight 20/20 4.0 at the Speedwitch site 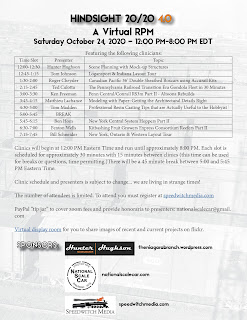 Posted by Ted Culotta at 4:40 PM No comments:

I recently finished this model for friend and 'Q' modeler Al Hoffman. He did all the construction and detailing. I took his good work and media blasted the metal details with aluminum oxide. I washed the model using liquid dish soap and a soft toothbrush. I applied a base coat of Tamiya XF-66 Light Grey. For the body color, I used Red Leather (136) by Vallejo.

The decals are a mix. The dimensional data came from Microscale's 87-734 set for CB&Q wood box cars. The other lettering, including reporting marks, capacity, build data, etc., were scrounged from Speedwitch CB&Q lettering. Interestingly, the plate on the door for the "Burlington Route" emblem was too small compared to the decals from Speedwitch, Westerfield, and Microscale. I had to make the white border slightly smaller to fit and it is evident if one looks closely, as the lines are close the the "B" and "n" in "Burlington."

The 500 members of the XM-29 class were built in 1936 in company shops and assigned to nos. 25500-25999. They continued the Q's preference for single sheathed cars. HO scale Q modelers are fortunate as all of the single sheathed classes from XM-21 through XM-31 (the class XM-24 class was 40-ton USRA double sheathed cars) have been available as resin kits. The USRA cars have been produced in both styrene (Rapido, Accurail, and Ertl) and resin (Westerfield and Funaro & Camerlengo.)

Posted by Ted Culotta at 2:27 PM No comments:

Blade One Nipper Item Code: GODGH-PN-120
I frequently espouse keeping up with the goings-on within the military modeling community. They seem to operate in a parallel world that sometimes intersects with ours, but seemingly should more often. Over the years, I have found many incredibly useful tools that those guys use that we in the model railroading community know little about. These tools from GodHand are good illustrations. The nippers are incredible. Their cutting edge is quite sharp and the leverage of the cut is solid, with the cutters doing the work. The sharpness of the cutting edges means that things that would often deform through cutting, such as hollow tubelike shapes, do not; the cutting action starts before any "crushing" forces are imparted, making them extremely delicate. They won't make my Swiss nippers obsolete, as their jaws are not as fine, but they have firmly established a place in the tool box. 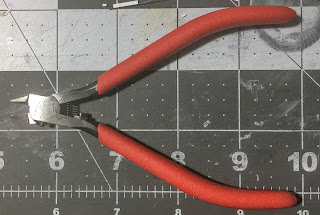 The other find from GodHand are these chiseling tips. Think of them as the old Xacto no. 17 blade on many doses of steroids. They are incredibly sharp (as in be very careful sharp.) They are also substantial hardened metal, making them work with less effort than the old Xacto blade. There is far less "slippage" since these do their work with less effort. I have used them many times and love them; I can't wait to try them to remove the end detail from an MDC 50' single sheathed auto car. The handle shown above is an Excel handle from MicroMark (Excel part no. 30605.) I purchased the GodHand items from HobbyLink Japan, but you can find them on eBay, too. Postage was modest and they arrived quickly. 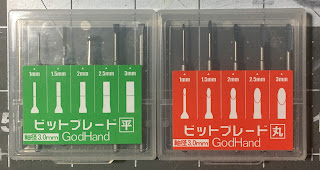 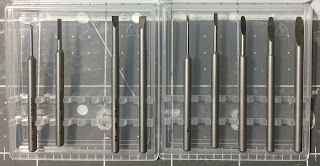 Another throwback... of the models I built for the "Essential Freight Cars" series this is one of my favorites. I was thrilled with the outcome, particularly the weathering and it is such an attractive car. In case you did not see the article, the model is a Trix/Marklin UP B-50-24/27 box car, with the body stripped. I replaced the roof with an IMWX roof and added a Speedwitch UP welded underframe. The model was lettered with Speedwitch decals from set D125. I was also thrilled to have a prototype that used the Superior power hand brake from Red Caboose (see below.) 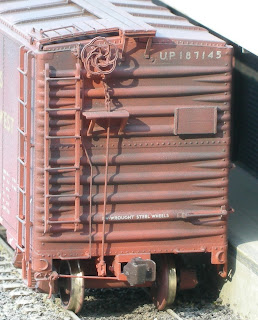 The UP B-50-24 & -27, along with several other classes of UP steel box cars and some groups on the SP and SSW, had "alternate center rivets" in the middle of the steel side sheets, as shown in the photo above. This was a subtle, yet distinctive detail that prototype modelers seek to replicate. Below is a table that details the various groups of the B-50-24 and -27 cars.

Posted by Ted Culotta at 6:10 PM No comments:


If you have ever wondered how a shifted lumber load is re-adjusted, it's not done board-by-board. Watch this video to see the cool way that it's fixed. The video also has a short clip showing a journal being repacked, along with some pretty godawful humor. The whole clip takes less than a minute. You can buy a high res version by clicking here.
Posted by Ted Culotta at 11:05 AM 1 comment: