Building the DT&I 7000-series gon... or nothing is ever as easy as it should be

Almost 15 months ago (I can’t fathom how it’s been that long) I posted an alternative means to create a DT&I gondola, using the Proto 2000 Greenville gon instead of the more commonly used Athearn gon. Interestingly, I recently came across Richard Hendrickson’s article on dating freight cars in the June, 1997 issue of RailModel Journal and he included a photo of his kitbash of a DT&I gon using the Athearn model, but mused that “today it would be easier to use a Life-Like [Proto 2000] kit”. Quite literally within hours of my post, Frank Hodina had done the hard work of cutting and re-assembling to create the DT&I gon. He sent the completed body to Tom Madden, who, in turn, copied and cast the body and ends. I created artwork for decals that I had printed and offer as Speedwitch D157.

Before discussing the model, a bit about the prototype… the Detroit, Toldeo & Ironton purchased 300 41'6" drop end mill gondolas that were obviously influenced by the Greenville-design 52'6" mill gondola that became the predominant mill gondola of the 1940s, purchased by roads including Erie, Pere Marquette, Nickel Plate, New York Central, Pittsburgh & Lake Erie, DT&I, St. Louis - San Francisco, Burlington, and Western Pacific, among others (see Railway Prototype Cyclopedia, Vol. 3). The DT&I cars were placed in the series 7000-7299. In the postwar period, large numbers of the cars were assigned to auto frame loading, including fixtures to secure the frames. As built, the cars were painted mineral red, but in the postwar years, the DT&I transitioned to painting gondolas black.

My initial (mis)perception was that this would be a very easy car to complete. I decided at the outset that I would completely ignore all underframe detail, as it would not be visible with the deep sides and the car body setting low on the trucks. Honestly, that approach would still result in a very fine model. Of course, I made the mistake of looking at prototype photos and noticed that there was a lack of rivet detail where it should have been had the cars had collapsible stake pockets on the interior, meaning that the DT&I gons lacked the interior stake pockets present on the Proto 2000 (as well as the kitbashed resin) gondola. Another detail I noticed was that while the Proto 2000 side structural members had rivets at all locations, the DT&I gon had rivets at alternate locations on the flanges at either side of the structural members, above the floor line, except for the members where the interior side splice plates were located. Additionally, I noticed that the body bolsters and truck kingpins were located closer to the center of the car than on the Proto 2000 model. Finally, the DT&I gons had push pole pockets that were missing from the Proto 2000 gon. There are a few other more subtle differences highlighted herein. Note: if the car is modeled with a load, most of these differences, save the bolster/truck location, would not be visible or of the extreme nitpicking variety anyway.

I stripped the detail from the interior of the sides. I decided it would be relatively easy to add splice plates, the portion of the bulb angle at the top of the inside of the car side, and rivets at the appropriate locations. Using a Mission Models chisel tool as well as an Xacto no. 17 chisel blade, I removed all interior detail. I filled the surface defects and marks left by the chiseling with Mr. Surfacer 1200 and ACC and sanded the interior smooth by wet sanding with 320, 400, and finally, 600 grit sandpaper. The flange of the bulb angle that was attached to the top of the interior of the car sides (speaking of the prototype) was replicated with a strip of 0.005" styrene, four (4) scale inches in width. This was attached to the top edge of the interior using a mixture of 50% Goo and 50% MEK (methyl ethyl ketone). This Goo-MEK mix is my default adhesive for dissimilar materials. I keep a small jar of the mixture on my workbench and use it regularly. I applied ACC along the top edge of the side as an added adhesive, as well as a filler. While the ACC was still somewhat soft, I ran a few drops of water along the ACC and then wet sanded the surface with 320, 400, and 600 grit sandpaper (once ACC has completely dried and hardened, it sands at a dissimilar rate than resin or styrene, making it easy to remove more of one material than another, creating unrealistic variations in the surface; by sanding while the ACC is still somewhat “soft”, it is easier to uniformly remove material when sanding.) Next, again using Goo-MEK, I added 0.005” styrene strips, eight (8) scale inches wide, where the side sheets were spliced. I located these strips by holding up the casting to a strong light so I could carefully align the strips with the outside structural members. At the top of the interior of the side, these strips overlap the bulb angle. MEK helped the strips to conform, but this also caused minor buckling and pitting of the strip. I filled the surface of the strip with Mr. Surfacer (this is the reason for the gray areas present in the strip) and sanded it smooth with sandpaper. 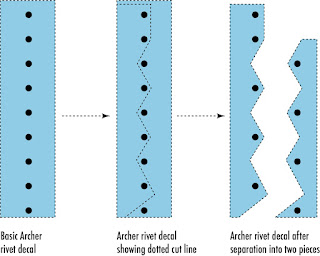 The rivets that I added to the interior are from Archer Surface Details. Because most of the rivets on the prototype were spaced in an alternate fashion, and I did not want to apply them one at a time, I improvised by cutting the rivet strips in a zig-zag fashion. See the attached graphic. This allowed me to mostly place the rivets in groups. The rivets along the top edge, on the bulb angle, do not alternate and were applied in several long strips. The rivets at the splice plates do not alternate, so they were applied straight from the Archer sheet. I added several applications of decal setting solution, popped all air bubbles and then brushed on a coat of Future floor wax to seal the decals. Future provides a protective barrier, is quite thin, and levels nicely even when applied with a brush.

The towing loops on the bottom of the side sills were scratchbuilt. The loops are 0.012" wire, bent in a circular shape and inserted to holes drilled in the appropriate locations. The ends of the loops were simulated with 0.7 mm discs punched from 0.005" styrene. Rivets harvested from an Athearn undecorated snow plow shell were glued in the center of these discs. The discs were punched using an RP Toolz punch and die set that I will review in a separate, upcoming post on this blog. 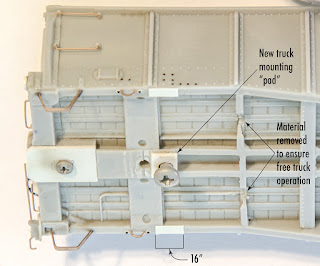 I already made reference to the location of the bolsters in a couple places herein. That was easily the biggest surprise in this project. I did not want to engage in a complete rebuild of the underframe. Fortunately, the car sits low enough that I could just create a relocated truck mounting “pad” and add some 0.005" styrene below the side sill to simulate the outer portion of the bottom body bolster cover plates. The truck mounting “pads” are 0.020" thick styrene glued in place to align with the rivet locations on the car side. New truck holes were drilled and 3/16" 2-56 screws hold the trucks in place. The simulated ends of the body bolster cover plates are 0.005" styrene strips sixteen (16) scale inches wide, with the depth not too important. Also, note that material was removed from the adjacent crossties to ensure free truck operation.

On the left side of the car (left if looking at the B [brake] end of the car), I added the appropriate details to replicate the visible brake detail. The pressure retaining valve is part of the body casting. I drilled a hole in the bottom of the valve, as well as a hole in the car side, and added 0.008" wire to replicate the retainer pipe. I also added three rivets to represent the bracket (not visible) for the AB valve (note that these rivets were added after the in-progress photo was taken so they are only visible in the photo of the primed car body; they are highlighted with a “callout”.) The mounting plate for the hand brake was created from 0.005" styrene, fourteen (14) scale inches wide and trimmed as shown. It was glued against the flange of the frame of the end, using the Goo-MEK mixture, followed by ACC. The hand brake was replicated using a Tichy Ajax power hand brake housing, a Kadee Ajax hand wheel, and a segment of Builders in Scale chain spanning the hand brake housing and the end sill, as shown. U-shaped wire loops created from 0.010" wire were used at each end of the chain and glued into holes drilled with a no. 79 drill bit to secure the chain. 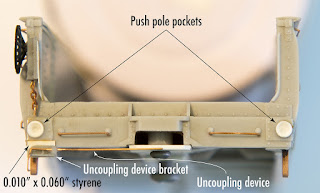 The DT&I prototypes had push pole pockets that are absent on the car body casting. I created these using 2.0 mm discs punched from 0.020" styrene. I glued the discs in place using the Goo-MEK mix and then added ACC around the perimeter of the discs. I used a no. 50 drill bit to create the round depression in the face of the push pole pockets. The uncoupling devices were fashioned by first adding 0.010" x 0.060" styrene strips below the push pole pockets on the ends. To the face of the styrene strips, I added cast resin brackets from the spare parts bin, although suitable facsimiles could be created from styrene strip and eye bolts. The devices themselves were bent from 0.012" wire.

I added several other details that are noted here, but require little additional explanation. The grab irons were created from 0.010" wire and inserted into holes drilled with a no. 79 drill bit. The sill steps are A Line steps bent to match those on the prototype and inserted into holes (no. 73 drill bit), using the details on the car body as a guide. The coupler covers are 0.020" styrene cut to fit, and secured with 1/8" 0-80 screws (the casting set comes with covers; I received my casting set before the covers were added to the "package"). I used Kadee no. 153 “short shank” scale couplers with “whisker” centering springs. Tahoe Model Works TMW-107/207 AAR double truss trucks are a match for the prototype.

Part two of this model build will be posted later this week and will include painting, decaling, weathering, floor, etc….
Posted by Ted Culotta at 9:40 AM